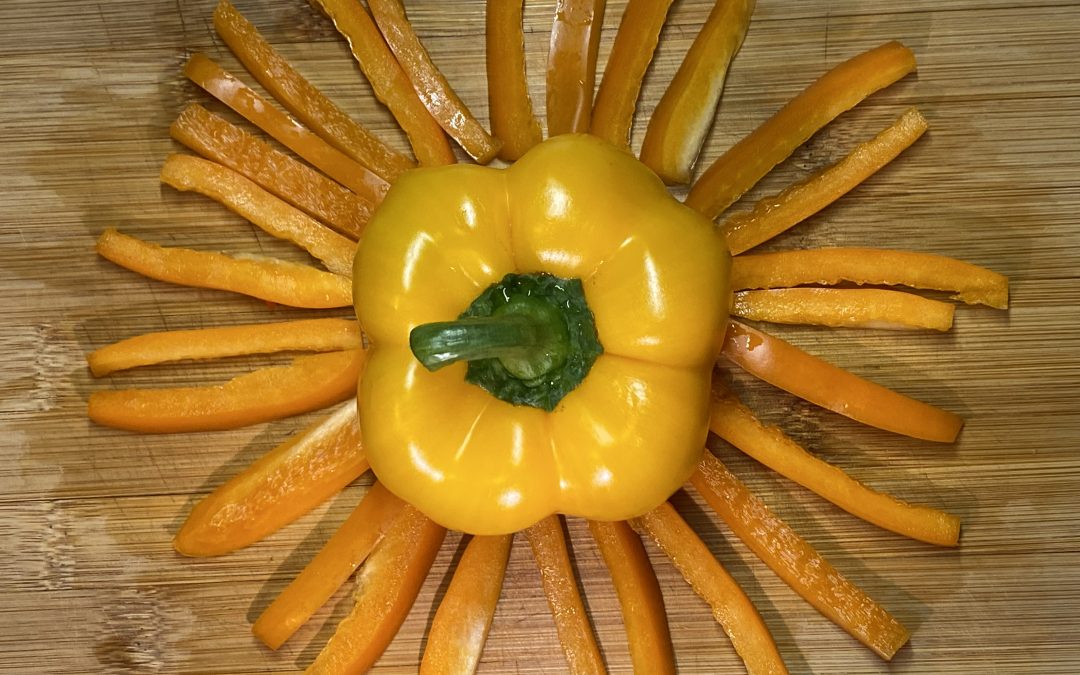 Beef Strip Tacos is a dish I like to make when I’m feeling saucy. Rather than typical taco seasoned ground beef, why not liven things up a smidge by getting fancy with a knife while slicing your meat? A great exercise for the budding culinary beginner, level up your taco game with this simple recipe!

For beef strips we are going with flank. Located directly under the loin, the flank is known for being a flavorful, but tough cut of meat. That is why the proper cutting should be observed when preparing for this meal. Two things to look out for, the direction of the grain and the angle of the cut.

If you lay the steak out flat, you will see lines running from one side to the other, which is the direction the grain is going. These are long muscle fibers that when cut shorter make the meat easier to chew and break apart. Orient the steak to where those lines are running from left to right. Cutting perpendicular to these lines from up to down is cutting across the grain. The picture included shows the direction of the grain from left to right. Make the cuts from top to bottom. 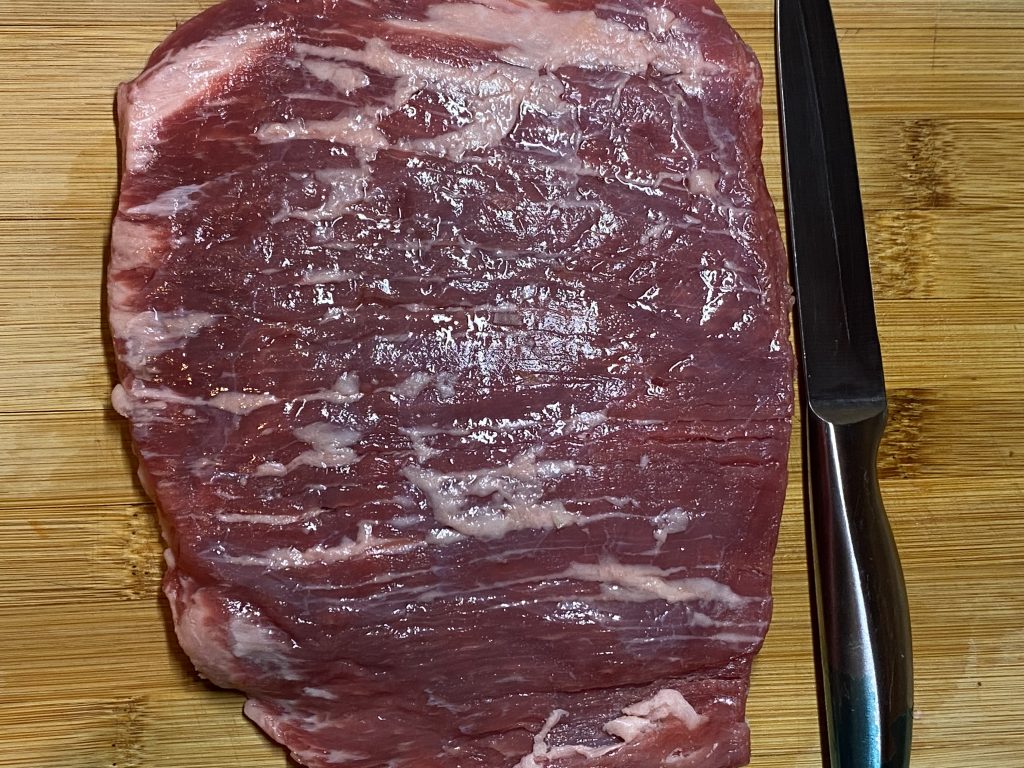 Next is making the cut. Use a sharp knife for this task. To give it a little stiffness and make an easier time of cutting, you can put the flank in the freezer for about 30 minutes before cutting. Once you have the steak laid out in front of you, cut your slices at an angle – around 10 degrees – and around ¼ inch apart. To make this a little easier, put your free hand on the opposite side from where you are cutting to hold the meat in place.

If your knife is sharp, you should be able to place your cut and pull the knife through the meat by keeping your forearm locked in place and pulling back your arm at the shoulder. Try to avoid sawing the meat. If it’s not separated in one pass, start from the top again and slide the knife through all the way down. So remember, the key is across the grain and at an angle.

If you cut the flank into strips with this method, the end result will be tenderized and easy to chew strips of meat. 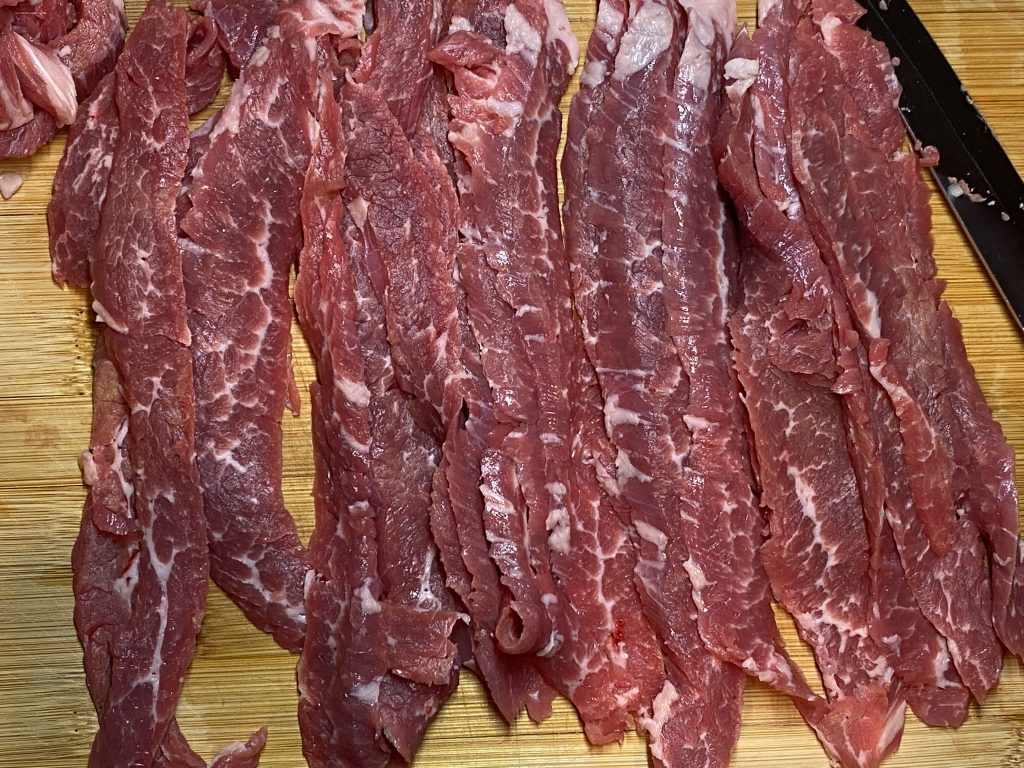 Use 1 Tbsp of olive to coat a large saucepan. Setting the stove to medium heat, toss in sliced bell peppers and onion and saute for 5 minutes partially covered. Occasionally stir and toss the vegetables. Once the colors brighten and the veggies soften a tad, remove from heat and set aside.

Using another Tbsp of olive oil, regrease the pan and set the temp to high. Put flank strips in a single layer on the pan and cook for 2 minutes on each side. I find tongs to be a useful tool moving everything around. Remove strips from heat and let rest. I generally have to cook the strips in two batches, so repeat the process, but you don’t need to add more oil.

Once the vegetables and meat are cooked, use ½ Tbsp of olive oil to grease an iron skillet large enough to fit a tortilla onto. You can also opt for butter in this process. Setting the stove back to medium, place the tortilla onto the skillet for about thirty seconds on one side and flip. To get a crispy outer side, allow the other side to sit in the skillet for around 2-5 minutes. You can lift up the side and check underneath for browning.

During this time you can place the meat, onion, bell peppers, and avocado topped with cheese onto one side. I’ll also throw a pinch of the Limeli seasoning on, season to taste. After the tortilla has sat for a couple of minutes on heat, fold and press into that traditional hard shell taco shape. If you are feeling brave and confident, try giving it a flip! Otherwise, you can just take it off the heat once the cheese has melted.

After removing from the skillet, open it back up to add sour cream, salsa and cilantro. Of course, this is just one method. Add and subtract to make the taco of your dreams! I also like using mango for a sweet addition. Good luck! 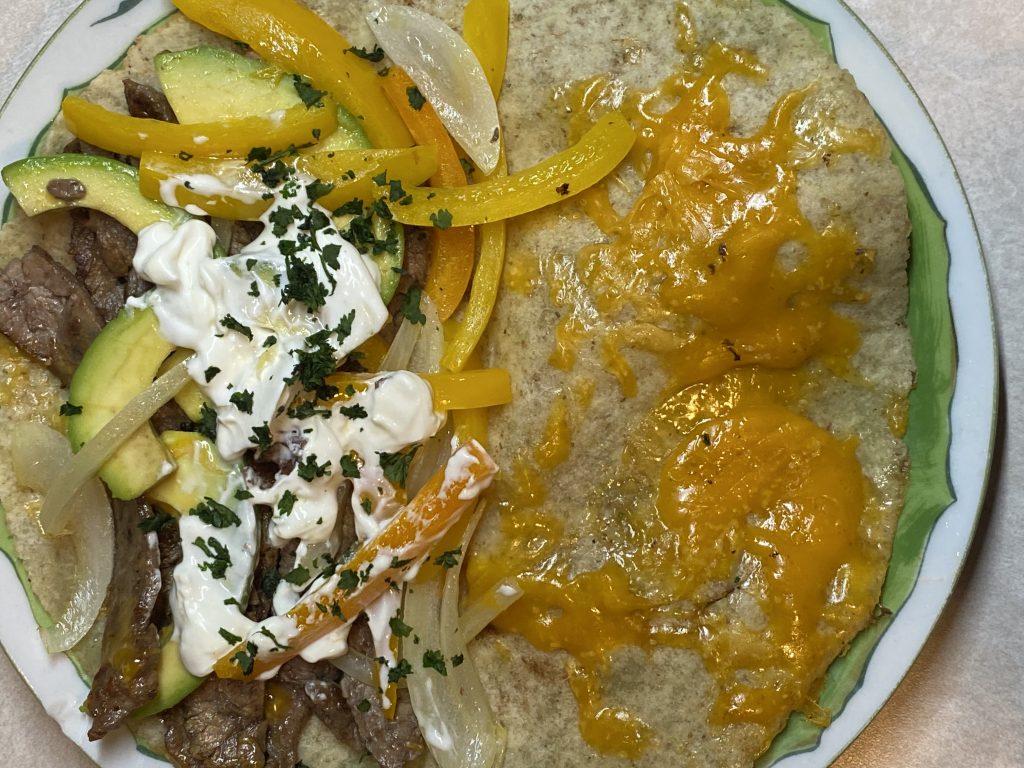